What does hamsa mean? Hand of Fatima or Hamsa meaning in Christianity, Judaism, and Islam.

Hamsa is a talismanic symbol that people believed to protect them from harm against evil forces.

The Hamsa Hand or Hand of Fatima is an ancient Middle Eastern talisman. In all religions it is a protective symbol. It is a talismanic symbol that people believed to protect them from harm against the evil eye and bring them goodness, abundance, fertility, luck, and good health.

Many early cultures adopted the eye as an icon for their protection, others used Hamsa and so over time the most popular universal symbol became an eye placed in the palm of a hand. Hamsa hand bracelet or hand of Fatima necklace is worn by people who have faith in a "Supreme Power" and find themselves at a cross-road in life. They could follow different religions; some of them could be Jewish, Muslim others could be advocates of Christianity or Buddhism. Irrespective of their religious beliefs, they would find themselves in a common ground as far as having faith in a Higher Power is concerned. The amulet consists of five spread fingers, often with an eye on the hand. It can be found today throughout the Middle East in women's jewelry, as hamsa bracelet, hamsa necklace, the hand of Fatima pendant, flat-weaving, embroidery, door-knockers, automobile ornamentation, and so on. They would want to depend on this energy source to keep themselves protected from negative influences that are otherwise outside their control. Hamsa hand or Hand of Fatima can now be found as an attractive symbol in people's homes or may even be worn by them as ornaments. Many people still place it in their homes where the guests can see at the moment they enter. As there is a widespread belief that it will protect the house and household from disasters primarily fire.

The hamsa hand has a wide variety of different spellings which include hamesh, hamsa, chamsa, and khamsa.  It is also identified as the Hand of Miriam, Aaron and Moses's sister, and the Hand of Fatima. The wearer of the hamsa hand can wear it facing up or down and it is believed to give the owner success, harmony, and protection from the evil eye or Nazar.

The word, "hamsa," derives its name from the five fingers on the hand. In Hebrew, the number five is "hamesh" and the fifth letter of the Hebrew alphabet is "Hey," one of God's holy names. "Hamesh" is representative of the five books of the Torah. In Judaism, it is also interpreted to be the Hand of Miriam, and symbolic of the owner's five senses in an effort to praise God.

In Arabic, it is "khamesh." In the Sunni culture, the hamsa is associated with the Five Pillars of Islam.  For the Shi'ites, it symbolizes the Five People of the Cloak.  In the Islamic faith, it symbolizes as The Hand of Fatima, the daughter of the Prophet Mohammed.

What is the meaning of Hamsa Hand or The Hand of Fatima Amulets with Evil Eye Symbol?

A blue eye can also be found on some forms of the hamsa hand jewelry, an apotropaic hand-shaped amulet against the evil eye found in the Middle East. The word hamsa, also spelled khamsa and hamesh, means five referring to the fingers of the hand. In Jewish culture, the hamsa is called the Hand of Miriam; in Muslim culture, the Hand of Fatima. The Fatima amulet is called a Khamsa in the Muslim world, from the Arabic word for five, and is seen as protection against the evil eye. The amulet consists of five spread fingers, often with an eye on the hand. It can be found today throughout the Middle East in women's jewelry, as hamsa bracelet, hamsa necklace, the hand of Fatima pendant, flat-weaving, embroidery, door-knockers, automobile ornamentation, and so on.

According to the Native American version, a person who stares fixedly at a pregnant woman or a child or who is too admiring or physically affectionate with children may produce a malicious effect on their lives, whether or not by intent.

This belief may have arisen because people from cultures not used to the evil eye, such as Northern Europe, are likely to transgress local customs against staring or praising the beauty of children. Thus, in Greece and Turkey amulets against the evil eye take the form of blue eyes. The Turkish talisman Known as nazar is most frequently seen in Turkey, found in or on houses and vehicles or worn as beads. A blue or green eye can also be found on some forms of the hamsa hand, an apotropaic hand-shaped talisman against the evil eye found in West Asia. The word hamsa, also spelled khamsa and hamesh, means "five" referring to the fingers of the hand. In Jewish culture, the hamsa is called the Hand of Miriam; in some Muslim cultures, the Hand of Fatima. Though condemned as superstition by doctrinaire Muslims, it is almost exclusively among Muslims in the Near East and the Mediterranean that the belief in envious looks containing destructive power or the talismanic power of a nazar to defend against them.

Adopted by many sects such as Muslims, Christians, and Jews. The image of the open right hand is seen in Mesopotamian artifacts of teaching and protection. Other symbols of divine protection based around the hand include the Hand-of-Venus (or Aphrodite) and the Hand-of-Mary that was used to protect women from the evil eye, boost fertility and lactation, promote healthy pregnancies, and strengthen the weak.

Which way up should the Hamsa hand be?

Hand Facing DownWhen the Hamsa hand faces down, it opens you up to all of the abundance and goodness of the universe, welcoming them into your life. Hand facing down also brings fertility and answers to prayers and manifestations. Often, in this position, the fingers are closed together to bring good luck.

Hand Facing UpWhen the Hamsa hand is facing up, it is a universal sign against evil. It is a powerful sign of protection, and shields us from our inner thoughts of hatred, jealousy and insecurities. Often, in this position, the fingers are spread apart to ward off evil. 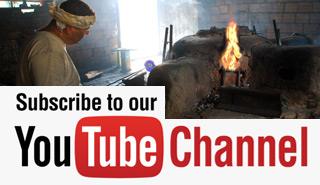 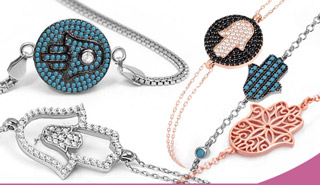 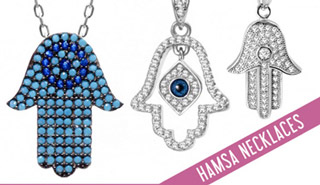 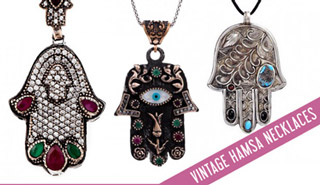